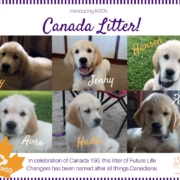 These future life changers were named after influential Canadians or significant historical events for Canadians.

We are pleased to introduce:

Hansen – in honour of Rick Hansen, Canadian Paralympian, activist, and philanthropist for people with disabilities. This puppy was sponsored by NSD volunteers

Vimy – in honour of the fallen Canadian soldiers at Vimy Ridge. Sponsored by Liz Hayes of the Maycourt Club

Want to join the discussion?
Feel free to contribute!

A Few Years Back….I Fell in Love!
Scroll to top