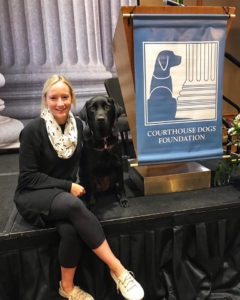 “I first became involved with National Service Dogs when I applied for a Facility Dog in early 2015. I was the coordinator of the Child Witness Program in London, Ontario and spent my days with children who were required to testify in criminal court. While Canada has protections in the criminal code for child victims and witnesses, children continued to struggle as they participated in a system that was adult-centred and not trauma-informed. After hearing about PADS Caber, a facility dog in BC who was helping victims and witnesses of crime testify in court, I applied to National Service Dogs in the hopes of starting a similar program. In October 2016, NSD Merel joined the Child Witness Program team, becoming the first accredited facility dog in Ontario.

From October 2016 to October 2019, Merel and I worked together assisting child victims and witnesses of crime and their families. Merel sat with children while they testified in both the Ontario and Superior Court of Justice. She attended court preparation meetings between children and Crown Attorneys. She sat with victims of human trafficking while they spoke to the police about their victimization. She attended public events and training, and helped educate people on the positive impact facility dogs can have on the justice process. For her efforts, Merel was added to the Mayor’s Honours List in 2019.

Unfortunately, Merel was diagnosed with Addison’s disease and her successful career was cut shorter than we had hoped. While Merel was doing okay, the medication she was on made it challenging to sit in court for extended periods of time. Despite Addison’s disease and the side effects of the medications, Merel is still a happy, healthy dog and as a result, she now acts as an Ambassador Dog for NSD. Merel loves suiting up in her jacket every now and again to attend events that help raise awareness for NSD and the great work that they do! In particular, Merel and I enjoy supporting events with 24 Hours of Heroes as we both have many dear first responder friends from our time working at the courthouse.

Puppy raising is something I always wanted to do, but while working with Merel it was not feasible. When Merel retired, it seemed like the perfect opportunity to give puppy raising a try. Knowing that someone puppy raised NSD Merel for us, I was eager to return the favour. I have the privileged position of being both the recipient of an NSD dog and now a puppy raiser. Knowing the tremendous impact that this puppy will have on the lives of others in the future is what keeps me motivated. I am so grateful to have a small part in the life of a dog who will positively change someone’s future forever.”

Thank you Rachel for all you do for NSD!